Network Time Protocol (NTP) is a protocol designed to help computers synchronize their clocks over a network connection to a remote server. Basically, a computer polls another computer that exists at a certain IP address in order to synchronize its internal clock with that computer. This helps organizations make sure that each computer using this protocol will maintain an accurate time.

NTP is used with Impinj Speedway readers to help the readers display accurate time data when performing inventory counts. When the timestamp property of a tag read does not match the time shown on a computer's system clock, it is evident that there is an issue with the reader's NTP server connection.

For this article, we will troubleshoot the reader's connection to https://www.ntppool.org/en/, a volunteer site that hosts free NTP servers from around the world.

There are few steps that can be followed to resolve an NTP issue on the Speedway readers. To ensure that these steps work for your reader, please ensure your reader is upgraded to the latest firmware, which is available in the Downloads section above. Instructions for installing the firmware can be found at Installing Firmware for the Speeedway Revolution Reader.

Also, troubleshooting NTP issues could require the user to enter RShell commands directly to the reader to change reader settings and obtain reader logs. If you are new to interfacing with the reader in this way, check out our guide on Obtaining Reader Logs from Speedway Revolution Readers.

After the reader's firmware has been updated, the next step for troubleshooting the NTP server is to verify that the reader is connected to the internet or to a local network. By default, the readers have DHCP enabled, and they will try to pull dynamic NTP server information from the network to which they are connected. If a reader loses its network connection, it may not be able to sync its system clock with the available NTP servers. To check the network connectivity of the reader, SSH into the reader and enter the RShell command "show network summary". The output of this command should be similar to the one shown below. 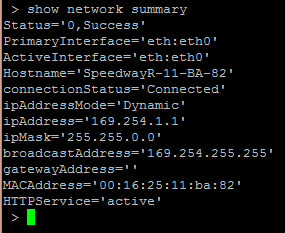 Another very useful RShell command is "show network ntp". The output from this command will show information on what NTP servers are being used, as well as their connection status. 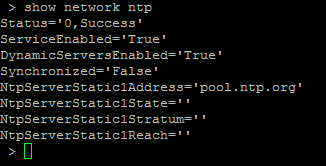 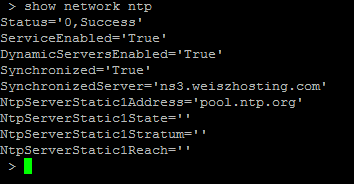 If the reader is still unable to resolve the NTP issue, you can change the reader's settings to use the specific hostname or IP address of an NTP server. To do this, enter the commands below:

To check the system time after NTP configuration, use the command "show system summary". The system clock should be set to UTC.

When entering the command "show network ntp", if the reader shows a Status of "System-Resource-Limit", it is possible that the reader's configuration files have been corrupted and the reader will need to be factory reset. This can be accomplished by unplugging the reader and holding down the reset button for three to five seconds, until the Power LED blinks red. The Power LED should now alternate between red and green, and then will be solid green once the reset is complete.